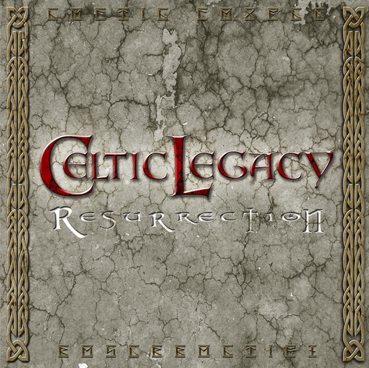 Resurrection is the 2nd album from Celtic Legacy

Recorded between June and October 2003, Resurrection still holds a special place in the affections of Celtic Legacy fans.

A big step up from the band’s debut, Resurrection contains numerous tracks that immediately found their way into the band’s setlist and there they would remain up to the end of the band’s first phase in 2009.  The problem for the band was deciding which Resurrection material not to play, with tracks like Children of the Sky, Live by the Sword, Guardian Angel and Emania taking up a permanent place in any set, ultimately the decision to include or discard other tracks was made according to the allotted set length at each individual concert. One track that was never in any danger of being dropped was the title track, a song that has become Celtic Legacy‘s signature song.

From a critical standpoint, Resurrection took may people by surprise. Contemporary reviews placed the album higher than many releases that year by established bands, most notably Metallica. The album has gained cult status among metal fans with the title track being singled out for praise.

1000 copies of Resurrection, (comprising the main album and a bonus disc as a ‘Special Edition’) were pressed and quickly sold out. The intention was to release a second run of the album as a single edition, but this never came to fruition. The line-up that recorded Resurrection did not last long enough to capitalise on the gains that were being made, the band splitting in July 2004 and the momentum sputtering to a halt.

Today Resurrection‘s only standalone release can sometimes be found on auction sites where sellers chance their arms with prices ranging from €100 to €500 for a used copy. Nice money if you can get it… the band certainly doesn’t!